“The Club” – a performance based on Matilda Voss Gustavsson’s book, which is the result of talks with students of The Aleksander Zelwerowicz National Academy of Dramatic Art in Warsaw as part of the so-called “working group” of the CHANGE NOW! project. The subject of the performance is the problem of women empowerment. In the book, which was an inspiration and a starting point for the screenplay, the creators were fascinated by the author’s accurate diagnosis of structural sexism, which permeates even very liberal societies. Interestingly, the story from “The Club” is somehow universal: it is not only a tale about a scandal in Sweden, but also an analysis of the mechanisms of violence in any institution, including theatre schools. It is a beautiful story about the courage of women and their solidarity, breaking with the mechanism of so-called victim blaming.

“The Club” is an original performance by fourth-year students – actresses, created under the supervision of Weronika Szczawińska – director, playwright and performer, lecturer at the Theatre Academy, winner of Polityka’s Passport Award and co-founder of the collective operating as part of the Institute of Performing Arts. Szczawińska believes that artists should stand firmly on the grounds of certain values, but also not give up looking for ways to communicate with the audience.

An important stage in the works on the performance, even before writing the script, was open, partnered conversations with the female students about what interested them most in “The Club”: a character? An episode? A situation? A theme? Which plot? On the basis of such conversations a proposal for the director’s copy was made.

The innovative model of work within the “Club” consists in abolishing the hierarchy of student-master and actor-director in favour of an equal cooperation of all male and female creators, while dividing roles according to the degree of responsibility for the learning process and the dynamics of group processes. The aim of the work on the performance is to take into account the needs of the female students and to democratise the process of working on the performance. An important, if not a key, aspect of the work on “The Club” also concerns the basis for the creation of the performance: the grassroots initiative of the female students, the diagnosis of the problems of exclusion and, finally, the cooperation of the female students with the students’ ombudsperson and the university authorities, followed by a joint development of solutions to the problem. and an attempt at their practical implementation, resulting in the premiere of “The Club”.

If you want to get a FREE ACESS TO THE CLUB VIDEO REGISTRATION WITH ENGLISH SUBTITLES, see our open events in October! 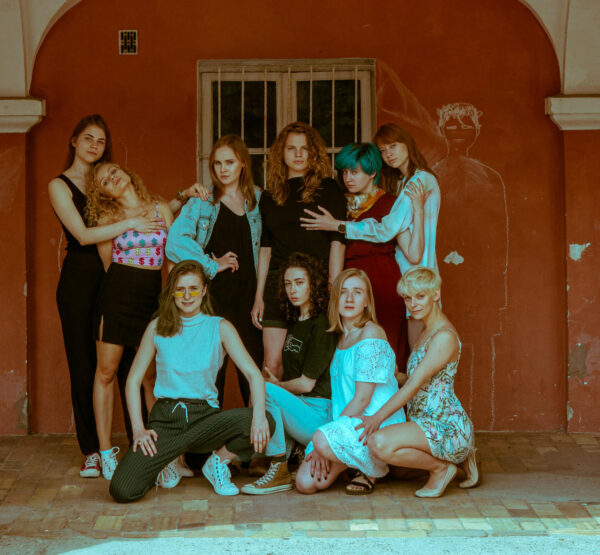 Based on: Matilda Voss Gustavsson „Klubben”
translated by:
Justyna Czechowska

NOTE: the performance shows scenes of description of sexual violence and it is intended for viewers ages 16 and older.